The first meeting of the Covenant of Mayors Club 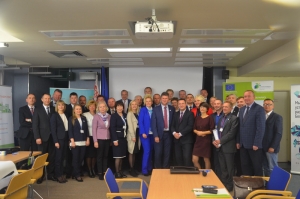 On October 17, 2018, the first meeting of the Covenant of Mayors Club took place in Minsk. About 40 representatives of local authorities and public organizations of the cities-signatories of The Covenant of Mayors on Climate and Energy came together to approve the Regulations on the Club's activities, outline a joint strategy and work plan for the Club for the coming year, and elect the Chairman of the Club.

At the end of the meeting, the members of the Club chose the role of the Chairman of the representative from the most active and experienced city-signatory, namely, the First Deputy Chairman of the Polack District Executive Committee Sergey Leichenko. Polack really has something to brag about: in 2011 it became the first signatory of The Covenant of Mayors in Belarus, first held Days of Energy and organizes them annually for 6 years, one of the first cities of Belarus received funding for energy efficient projects from the European Union and began to develop urban mobility.

Participating in the Club will help cities share best practices on sustainable energy development and climate; develop and implement joint projects in these areas; together look for opportunities to attract grants, investments and credit resources.

The idea of ​​creating the Club was proposed by the participants of the First National Conference of The Covenant of Mayors on Climate and Energy in Belarus, which was held in 2017 in Viliejka. On the basis of the proposals received, the Support Structure of The Covenant of Mayors − the “Interaction” Foundation and the IPO “Ecopartnership” − developed a draft regulation on the Club and suggested that the signatory cities join the initiative.

Elena Rakova, Project Coordinator of the European Union Office for Cooperation Office in Belarus, and Vladimir Shevchenok, Deputy Head of the Scientific and Technical Policy and Foreign Economic Relations Department of the Department of Energy Efficiency, wished the club sustainability, mutual assistance and development.

Currently, more than 45 cities in Belarus have joined The Covenant of Mayors on Climate and Energy initiative and have made voluntary commitments to reduce greenhouse gas emissions by 30% by 2030.