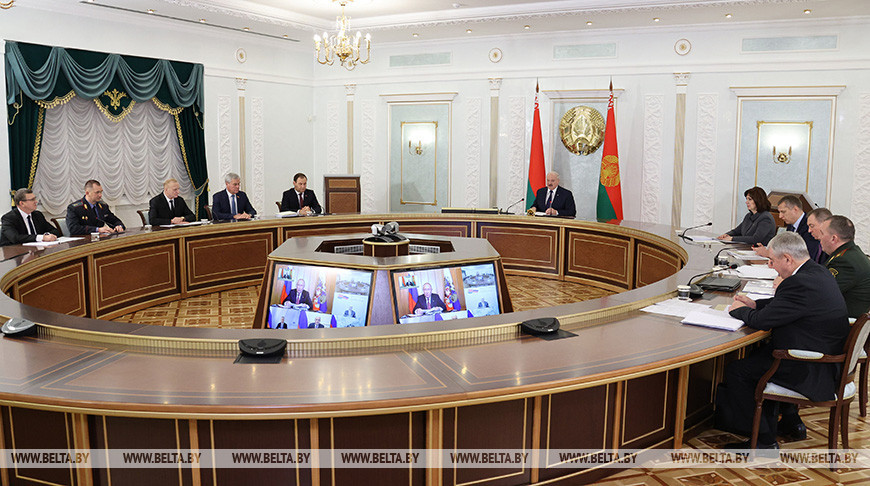 The event was held via videoconference. The document was previously signed by Russian President Vladimir Putin.

"Everyone criticized us. They, especially some Telegram channels in Russia, were wondering whether we would sign the documents or not. Today we have delivered the answer to this question by the entire Supreme State Council. Here, I am putting my signature. I see your [Russian president's] signature under the ordinance and also the signatures of all members of the Supreme State Council. If you don't mind, I will now sign the ordinance, too. Everyone will be held accountable, not only me," Aleksandr Lukashenko said before signing the document.

As BelTA reported, in the furtherance of the guidelines to implement the Union State Treaty in 2021-2023, the parties developed a package of 28 Union State programs, which are to become a practical basis for advancing the integration.

Following the meeting in Moscow on 9 September, the presidents of Belarus and Russia finalized all Union State programs. “Without having to retell the content of the documents we've discussed (they will be published, it is no secret), I will identify the key things in them such as equal rights for Belarusian and Russian commercial entities. Those equal conditions various representatives of Belarus have talked about for many years, including me as the president. It is the underlying foundation. We are equal partners,” Aleksandr Lukashenko stated back then in the Kremlin.

The Union State programs clearly spell out the mechanisms for the development of the common economic space: the formation of joint industry markets, harmonized financial, tax, credit, pricing, and trade policies. The documents also provide for a solution to the problem of energy supplies to Belarus. They also envisage increasing of the volume of transport services, financing of new investment projects, developing common principles to the agrarian and industrial policies, and raising mutual social guarantees for citizens of the two countries.

According to Belarus' estimates, direct effect of the integration package for Belarus is projected at about $1 billion in GDP growth, not counting additional opportunities for Belarusian business in the Russian market.